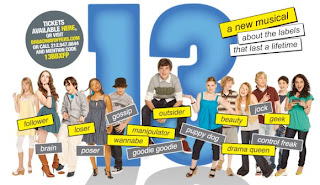 I really enjoyed the musical 13 when I saw it on Broadway in November. Sure, it was kind of gimmicky, with its all teenage cast and musicians.

But I thought it was a sweet story told with a lot of humor and poignancy about Evan Goldman, a Jewish teenager who moves from New York City to small-town Indiana on the eve of his bar mitzvah and struggles to fit in.

It's too bad the show couldn't have opened in the spring because I think it could have attracted tourists with teenagers visiting New York City this summer. Instead, it opened in the fall to lukewarm reviews and closed in January.

Anyway, now 13 will make its regional deubt at Theatre Under the Stars in Houston in September. According to Playbill, composer Jason Robert Brown and librettists Dan Elish and Robert Horn will test out a revised version at the French Woods Performing Arts Camp in Hancock, New York.

This is what puzzles me. Brown told Playbill that he and his collaborators "loved the show we put on Broadway, but felt that 13's future life would be well served by taking one more shot at certain sections of the piece, particularly those sections that might not make as much sense to an audience outside of New York City."

What is he talking about exactly? The only thing I could think of is, maybe they're toning down some of the Jewish references, the gentle pokes at the Gentiles and small-town America? I don't know.

I hope they're keeping the culture clash. To me, what really resonated was Evan's sense of feeling out of place and desperately wanting to fit in. We've all felt like a gefilte fish out of water at some point in our lives, haven't we?

I'm a fan of Brown's music and I hope that 13 has an afterlife in schools and regional theatres. But it would be interesting to know what wouldn't make sense to an audience outside New York City!
Posted by Esther at 2:56 PM