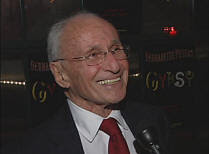 I guess everyone will have their favorite parts of New York magazine writer Jesse Green's article on the irascible 91-year-old Arthur Laurents.

Laurents comes across as both fearsome and vulnerable. Mary Rodgers Guettel declined to be interviewed, saying "Call me back when he's dead." There's also this tender side that I wasn't expecting, mostly when Laurents talks about his partner of 52 years, Tom Hatcher, who died of lung cancer in 2006.

But this bit, about casting for the Broadway revival of West Side Story, I found among the most interesting. (And this is from Green, not Laurents.)

"The cast would be younger, and the Puerto Ricans, if not Puerto Rican, at least Hispanic. (This wasn’t always easy; Josefina Scaglione, the 21-year-old Argentine who plays Maria, was tracked down on YouTube.)"

I understand that perhaps he wanted a young, fresh face. But Green makes it sound as if Laurents was almost desperate. Thank God for YouTube. Otherwise, well I don't know what they would have done. Because, you know, young Hispanic actors and actresses are not easy to find!
Posted by Esther at 1:00 PM