This is so sad. Playwright Horton Foote, one of America's "living literary wonders" in the words of former New York Times drama critic Frank Rich, died yesterday at age 92 in Hartford, Conn.

He had been adapting his nine-play Orphans' Home Cycle into three productions that will be presented by Hartford Stage Company and the Signature Theatre next fall. 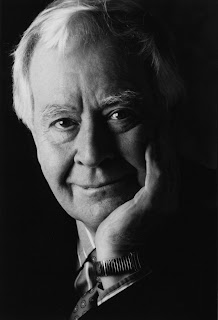 While I've enjoyed Foote's movie work, until last fall I'd never seen one of his plays on stage. I'm so happy I took in his family saga Dividing the Estate, featuring his daughter Hallie Foote, when the Lincoln Center Theater production was on Broadway in November.

You know, sometimes you just want to sit back and be entertained - and I was, tremendously so. I laughed, the characters were memorable and the situations the family finds itself in rang true to life. I enjoyed the entire cast, including Elizabeth Ashley, Gerald McRaney, Penny Fuller and Devon Abner. But I especially loved Hallie Foote's performance.

While he started out wanting to be an actor, Foote's acclaim came from his writing - for movies, television and the stage. He won the 1995 Pulitzer Prize for Drama for his play The Young Man from Atlanta and an Emmy in 1997 for a television adaptation of Old Man, a story by William Faulkner.

But it's his film work that probably garnered Foote the most public recognition. He received an Academy Award in 1962 for the screenplay for To Kill a Mockingbird and another Oscar for the screenplay of the 1983 Robert Duvall film Tender Mercies. I first heard of Foote when I saw the 1985 movie adaptation of his play The Trip to Bountiful.

The Times obituary says that Foote "depicted the way ordinary people shoulder the ordinary burdens of life, finding drama in the resilience by which they carry on in the face of change, economic hardship, disappointment, loss and death."

Like many of his plays, Dividing the Estate was set in the fictional town of Harrison, Texas, a place not unlike the community near Houston where Foote grew up and where his father ran a clothing store. I'm sure many of the characters he included in his plays were people he knew from childhood, too. In 2003, Foote delivered a lecture at Baylor University on "Writing with a sense of place," which you can watch here.

After seeing Dividing the Estate, I waited with a few other hardy fans outside the stage door of the Booth Theatre. Hallie Foote and the rest of the cast were very gracious about talking to us and signing autographs on a blustery fall afternoon. I'm so glad I had a chance to tell her how much I loved her performance and how much I enjoyed her father's work. He was a great storyteller.

Hallie Foote, one of his four children, is currently performing in the Hartford Stage production of To Kill a Mockingbird. According to the Hartford Courant, she went on last night as the adult Scout Finch. "He was a wonderful father and a fine man, but I can hear him say 'Get to the theater, darling.' ''

Horton Foote is survived by four children: daughters Hallie and Daisy, a playwright; sons Walter, a lawyer and Horton Jr., an actor; and two grandchildren. In his honor, Broadway marquees will dim tonight at 8 p.m. for one minute.

His family asks that donations in his memory be made to one of his artistic homes: the Goodman Theatre in Chicago, Lincoln Center, Signature Theatre Company and off-Broadway's Primary Stages.
Posted by Esther at 1:00 AM