In the Heights, under the sea 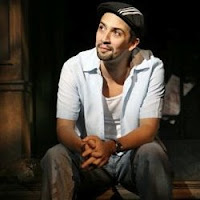 The talented Lin-Manuel Miranda is going in a new direction after the success of In the Heights. I thought he'd do something else for the stage while he worked on the movie version of the 2008 Tony winner for Best Musical. (And one of my favorite musicals of last year.)

But Miranda, who won the Tony for Best Score for In the Heights and portrayed bodega owner Unsavi until last month, has a new project. He's signed a deal with DreamWorks to develop an animated musical with Peter Barsocchini, screenwriter of Disney's popular High School Musical series.

The storyline is top secret - or maybe they don't have one yet - but there's a bit of a hint in this comment from Bill Damaschke, co president of production for DreamWorks Animation:

Hmmm, are we talking about 1989's The Little Mermaid for inspiration? Because the movie is very close to Miranda's heart. Last month he told the New York Post that composing a score for an animated film has always been a dream:

"I got Alan Menken's autograph when I was in fourth grade because I was obsessed with The Little Mermaid. His niece went to my school and I think the autograph actually says, 'To Lin, From Alan. Stop kissing Jenny's feet,' because I had been begging her. I couldn't get enough of those songs. I remember faking sick to get out of school so I could buy The Little Mermaid on VHS. I just rewinded the hell out of it."

Katey Lynch at Cinema Blend speculates that it's Miranda's "gift with lyrics that DreamWorks is probably interested in, and would translate perfectly to the screen."

She's got a point. I've listened to the Grammy-winning recording of In the Heights more than a few times. Sure, Miranda's rapping is fun and his mixing of different musical styles is imaginative. But what stuck with me are the songs that tell the stories of the Latino residents of this New York City neighborhood - where they grew up, what their lives are like, their dreams.

Coincidentally, among the recordings that In the Heights beat out to win the Grammy for Best Musical Show Album (they still call them albums) was the score that Menken, Glenn Slater and the late Howard Ashman wrote for The Little Mermaid.

Now that Shrek has whetted DreamWorks' appetite for Broadway musicals I'm thinking that whatever Miranda comes up with, eventually we'll see it on stage. And I'll be looking forward to it.