Opening night for West Side Story

The Broadway revival of West Side Story opens tonight, at the Palace Theatre. 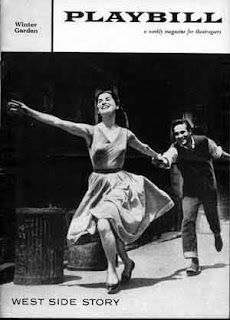 Here's part of what New York Times critic Brooks Atkinson had to say about the original production, which opened on Sept. 26, 1957 and ran for 732 performances:

"Gang warfare is the material of West Side Story, which opened at the Winter Garden last evening, and very little of the hideousness has been left out. But the author, composer and ballet designer are creative artists. Pooling imagination and virtuosity, they have written a profoundly moving show that is as ugly as the city jungles and also pathetic, tender and forgiving."

Of composer Leonard Bernstein and choreographer Jerome Robbins, he wrote:

"Using music and movement they have given [Arthur Laurents'] story passion and depth and some glimpses of unattainable glory. They have pitched into it with personal conviction as well as the skill of accomplished craftsmen."

While Atkinson mentions other members of the cast, he reserves his highest praise for the performances of Larry Kert as Tony and Carol Lawrence as Maria:

"Their balcony scene on the firescape of a dreary tenement is tender and affecting. From that moment on, West Side Story is an incandescent piece of work that finds odd bits of beauty amid the rubbish of the streets."
Posted by Esther at 12:36 AM