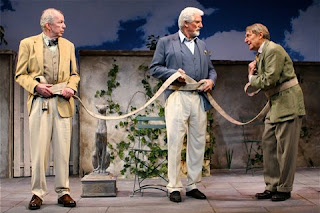 I have a soft spot for John Cullum. We go way back - in the 1980s I saw him on stage in Syracuse, in Look Homeward, Angel. This was years before I saw him on Broadway in 110 in the Shade.

So I really enjoyed this interview Jeff Lunden from NPR did with the 79-year-old Cullum about what it's like to perform in two plays at once.

As patriarch Beverly Weston, Cullum has the opening scene in August: Osage County. The 3 1/2-hour play begins at 7:30. But he's only on stage at Broadway's Music Box Theatre for about 15 minutes. Then that's it, he's done. Well, not really.

Six days a week, the two-time Tony winner leaves the Music Box on West 45th Street, between Broadway and 8th Avenue, and takes a brisk 11-minute walk to the Harold Clurman Theatre on 42nd Street, between 9th and 10th Avenues. (New York magazine has a timeline.)

He arrives at the off-Broadway venue roughly 20 minutes before curtain time for his second role of the evening. In Heroes, Cullum portrays one of three World War I veterans who dream of escaping from an old-soldiers home. (That's him on the right, with costars Jonathan Hogan and Ron Holgate.)

There's a nice interactive map showing Cullum's route and you can hear more from him at several points along the way. As he passes the Majestic Theatre, for example, he talks about auditioning for his first Broadway role, in Camelot, in 1960. "It was a hard drinking, wild partying extravagant musical."

I have to hand it to him. Cullum could have just done his August: Osage County bit and gone home. But he truly loves being on stage:

"More people see you in one episode of a big TV series than will ever see you [in] your entire career onstage," he says. "Something very strange about that. But look at how many actors come back to New York to recharge their batteries, so to speak. Or else they just want to do stuff onstage, because there's nothing quite like performing in front of a live audience. It's infectious."

Of course, Cullum isn't the only actor who's pulled double duty. In a 2006 interview with the American Theatre Wing's Downstage Center program, Cynthia Nixon talks about appearing simultaneously in Hurlyburly and The Real Thing for a span of about three months in 1984.

(And if the person from the American Theatre Wing who left a comment yesterday is reading this, I hope Downstage Center returns soon!)
Posted by Esther at 12:45 AM

I saw Heroes a little over a week ago. It's a very, very light play, but enjoyable.

And for those of us who know him from TV, you can't forget his roles on Northern Exposure and E.R. (to name just a few!).