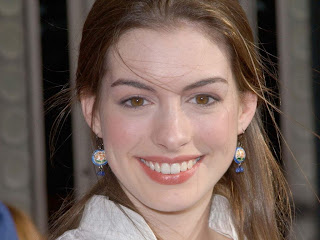 Last week I wrote about how I'd love to see Anne Hathaway in a musical - and now it looks like I'll get that chance. The Oscar nominee is going to play Judy Garland in movie and stage versions of the biography Get Happy, by Gerald Clarke.

The rights have been scooped up by The Weinstein Company, and Harvey Weinstein told Variety that Hathaway "will be a true class act in this challenging role." He said Clarke's biography "is particularly outstanding because of its exclusive details from her [Garland's] own writings."

I'm not quite sure how it will work. Will they make the movie first and release it simultaneously with a stage version? The only thing remotely resembling this is when Kevin Spacey did a concert tour singing Bobby Darin songs to promote his biopic Beyond the Sea.

I'm assuming Weinstein is planning a full stage production, which isn't a bad idea. You'll get twice the buzz. People who like Hathaway as Judy Garland in a movie will probably want to see her on stage as Garland. Didn't the movie of Chicago gave the Broadway show a boost?

Now, I think Anne Hathaway can do just about anything. Supposedly, she's always wanted to make a musical and this is her dream role. But one possible roadblock: according to the Hollywood Reporter, she has about eight inches on Garland, who was barely 5 feet tall.

Of course, Philip Seymour Hoffman was a lot taller than Truman Capote, too. And he did fine in the movie Capote, winning an Oscar for his performance. Although it's easier to mask that height difference in a movie than it is on stage.
Posted by Esther at 12:41 AM

Very cool. I don't know if the height thing matters -- most people (including me) probably don't know how short Judy Garland was in real life.

Incidentally, I watched "Rachel Getting Married" this weekend and loooved Anne Hathaway in the movie.

I saw "Rachel Getting Married" last week and I totally agree with you. Anne Hathaway did a great job. She looked so drawn and different from her usual roles. I mean, I'm used to seeing her all sweet and innocent!

And that's a good point about Judy Garland. I bet most people only know her from The Wizard of Oz. And because she's playing a teenager, her height, or lack of it, doesn't stick out. I mean, I didn't realize she was that small.

Anne has performed in various benefit concerts in NY and has a great voice. Acting is all about illusion anyway I don't think it makes a difference about the height.

Yeah, Ms. Hathaway does have beautiful brown eyes. And it sounds like she has the voice to handle the role, too. Okay, I'm not worried anymore about her height!