Actor and comedian Steve Martin has come to the aid of high school students in LaGrande, Oregon, after the school withdrew its permission for them to perform his 1993 play Picasso at the Lapin Agile. 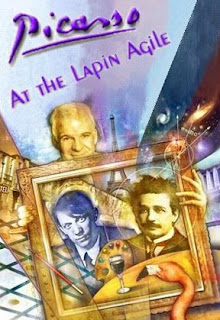 Apparently, some parents were concerned over the play's content - specifically sexual references and profanity - and its setting in a bar. At a school board meeting, they expressed concern that the content would preclude them from coming to see it.

That prompted a great retort from teacher and director Kevin Cahill, who noted that the meeting drew a bigger crowd than school plays. “Let’s be honest here. You have not been coming (to the plays),’’ Cahill said.

Good for you, Mr. Cahill! Let's hope whatever noncontroversial show you put on next draws a sellout crowd.

Now I'll admit I've never read Picasso at the Lapin Agile, so I don't know how appropriate or inappropriate it is for 16-year-olds and 17-year-olds. But here's Martin's description from a letter he wrote to the LaGrande Observer:

"Focusing on Einstein’s Special Theory of Relativity and Picasso’s master painting, “Les Demoiselles d’Avignon,” the play attempts to explain, in a light-hearted way, the similarity of the creative process involved in great leaps of imagination in art and science. Pablo Picasso, as a historical figure, does not come gift-wrapped for the sensitive. He lived as he painted, fully sexual and fully daring, and in the play he is chastised by a sage bartendress for his cavalier behavior toward women."

It's a fair letter. Martin says he understands why some parents might object to some of the dialog being uttered by teenagers. Still, he believes that the play can be an uplifting experience.

As a result, Martin offered to pay for a nonprofit, off-campus production, "so that individuals, outside the jurisdiction of the school board but within the guarantees of freedom of expression provided by the Constitution of the United States, can determine whether they will or will not see the play, even if they are under 18."

So LaGrande residents, and anyone else, can see the students' production of Picasso at the Lapin Agile at Eastern Oregon University, May 16-18. Sadly, Cahill says that Martin won't be able to attend.

But never fear: "His presence will be palpable even if he can't come," Cahill tells Entertainment Weekly. "We will leave a seat open to him in the middle of the front row."
Posted by Esther at 12:05 AM

Esther, I remember a huge brouhaha back in the mid-70s when one of my area's high schools mounted a production of Cabaret - pretty heady content for its time, let alone now.

Wow, that's interesting. I think Cabaret would be a pretty daring choice for a high school - but a great history lesson, too. Btw, out of curiosity I checked the rating for the movie and it's PG - no age restriction at all. So the same students whose parents might have objected to the musical could have gone to see the movie on their own.

Anyway, I know these controversies aren't exactly new. But it seems to me you have to keep in perspective what the play or musical is about.

My Jesuit college did "Picasso at the Lapin Agile" when I was a freshman. It was totally fine -- I liked the script, I really wanted the role of the barmaid (she's awesome, and a strong character -- wears pretty risque clothing but is no bimbo). It really is a very intellectual play, and sad and funny and fast.

I can imagine the passages highlighted for those 137 parents. Shame on them for not reading it in context.

Good for the director, pointing out the sudden interest in the play from a clutch of non-theatregoers. It's always those on the fringe who try to jam a wrench in the works with plays.

Esther, I believe the film version of "Cabaret" was initially rated R. The mores of our society have certainly changed over the past 35 years (just as they had in the 35 years prior to that and the ones before that). Today's shocking may just not raise eyebrows tomorrow.

It's great to hear from someone who's seen the play. From the description I've read, it sounds like it would be a great play for teenagers - very intellectually challenging.

Yeah, it did seem to me a little hypocritical that people who've never shown any interest in the school's theater program are suddenly up in arms over this. And you're right - they should have taken time to read the whole thing. It's not that long!

I wonder what the reaction would have been if the parents of non-athletes had demanded some change to the football program?

Thanks, Steve. I stand corrected!

I think it's important to pick plays or musicals that the students are interested in, that will challenge them. I think Cabaret and Picasso at the Lapin Agile can provide opportunities to learn about history and science and art and literature and different cultures.

Even the classic musicals, like Oklahoma and Fiddler on the Roof and South Pacific can do that. Or plays like The Crucible, which my high school did a long, long time ago.

I mean, you could have them put on High School Musical, which I think is harmless enough, but what would anyone learn from that experience?