For your reading and viewing pleasure

I'm not usually into mob stories but I loved The Sopranos. It's so hard for me to separate James Gandolfini from Tony Soprano that I can't imagine what it would be like to see him on stage.

Gandolfini is currently starring on Broadway in God of Carnage and there's a good, short interview with him by John Heilpern in Vanity Fair. Part of the interview is conducted in Gandolfini's Toyota hybrid SUV, as the pair drive around Manhattan looking for a quiet spot for lunch on a Saturday.

In 1995, Gandolfini appeared on Broadway in a very short-lived production of On the Waterfront. He tells Heilpern that he was fired for "being too mouthy." In 1992, he was an understudy in A Streetcar Named Desire that also featured his Sopranos sister, Aida Turturro.

But he says he's had a lot of experience playing small roles in small theatres. “Standing in public in other people’s clothes, pretending to be someone else. It’s a strange way for a grown man to make a living.” 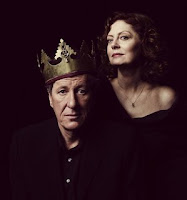 Then in Variety, Gordon Cox wonders whether nonmusicals can give Broadway a boost. I like this quote from Geoffrey Rush, who's starring in Eugene Ionesco's absurdist drama Exit the King, which Cox says some theatergoers might consider a "gloomy existentialist downer."

The youngest theatergoers might be the ones with the fewest preconceptions, Rush theorizes. "Anyone under 25 has no problem with Ionesco," he says. "They all grew up with Ren and Stimpy and SpongeBob SquarePants."

Okay, I never connected Ionesco with those two television shows but maybe I should check them out. 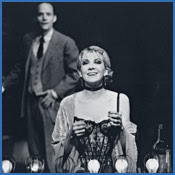 And finally, Sheila O'Malley, at The House Next Door, writes a very moving tribute to Natasha Richardson. She remembers what it was like to see her on Broadway in 1998 as Sally Bowles in Cabaret. "It was one of the most exciting nights of theater of my life."

It was really interesting to read how Richardson took a role that had been so inextricably linked to one actress - Liza Minnelli - and made it her own. O'Malley gives you a great sense of what it was like to see that memorable, Tony-winning performance.

Also, while she was doing Cabaret, Richardson took part in an American Theatre Wing Working in the Theatre panel discussion, which you can watch here. She also participated in an ATW panel in 2005 on interpreting Tennessee Williams and in a 1993 program on Anna Christie, with her soon-to-be husband, Liam Neeson, among others.
Posted by Esther at 12:10 AM

Miss Richardson also appeared on ATW's "Working in the Theatre" when she did "A Streetcar Named Desire," appearing with Jessica Lange, who was doing "The Glass Menagerie" at the same time. It was their only joint appearance.

Thank-you, ATW. I'll add the link to my post. It's hard to watch these now, so soon after her passing but it's great that we have these interviews preserved.

The funny thing about Cabaret is that Liza Minnelli really was a little too good for the role of Sally Bowles, which she took on in the film version to great success (she never played her on stage - the original Sally was Jill Haworth).

Sally was not intended to be the polished performer Minnelli turned her into. Many said Natasha Richardson returned Sally to the grittier side originally conceived.

I saw the video of Ms. Richardson singing Cabaret and I know what you mean. It's much more raw and insecure but very mesmerizing. From what I remember of Liza Minnelli's performance in the movie, it was a lot more polished and glitzy.

It's still hard for me to think of Jill Haworth, the young Jewish refugee in Exodus, all grown up and playing Sally Bowles!