Looking back on A Raisin in the Sun 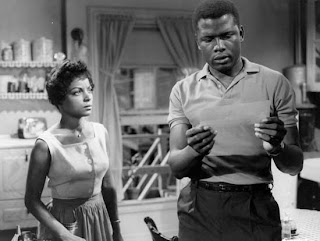 It was the play, wrote then-New York Times drama critic Frank Rich in 1983, that "changed American theater forever." Fifty years ago this week - March 11, 1959 - A Raisin in the Sun opened on Broadway.

The Great White Way's first drama by a black woman, Lorraine Hansberry; and the first with a black director, Lloyd Richards, debuted after only one preview at the Barrymore Theatre, and closed at the Belasco on June 25, 1960, after a total of 530 performances.

In his review for the New York Times, Brooks Atkinson called the story, about a working-class black family on the South Side of Chicago, an honest, illuminating work that is "likely to destroy the complacency of any one who sees it."

He had high praise for the entire cast, many of whom I know from their later work in movies and television: Ruby Dee as Ruth, Diana Sands as Beneatha, Louis Gossett Jr. as George Murchison, Ivan Dixon as Joseph Asagai, and a very young Glynn Turman as Travis.

But Atkinson singled out Sidney Poitier's portrayal of Walter Lee Younger and Claudia McNeil as his mother, Lena Younger.

"As the matriarch, Claudia McNeil gives a heroic performance. Although the character is simple, Miss McNeil gives it nobility of spirit."

"Mr. Poitier is a remarkable actor with enormous power that is always under control. Cast as the restless son, he vividly communicates the tumult of a highstrung young man. He is as eloquent when he has nothing to say as when he has a pungent line to speak."

"As a high school senior already involved in the civil rights movement, I found the play an unprecedented mainstream depiction of the social and economic constraints on urban black families and a stereotype-smashing portrayal of a diversity of black ideas and aspirations."

Harvard University Prof. Henry Louis Gates Jr. recalls his first encounter with the play, thorough the 1961 film, in which nearly the entire Broadway cast reprised their stage roles. (At top is a still from the movie, with Dee and Poitier.)

He writes about how contemporary the message seems. "The tension between Walter’s anxious yearning and Mama’s careful planning sums up the crisis among our people today."

Gates interviewed Ruby Dee, who reflects on A Raisin in the Sun 50 years later. It was interesting to hear her thoughts about why Lena, not Walter Lee, became the center of the play for audiences. And she talks about what it was like to see the 2004 Broadway revival.
Posted by Esther at 9:30 PM

Labels: A Raisin in the Sun, Broadway, Lorraine Hansberry, plays