I noticed that the Google homepage has a special Dr. Seuss theme in honor of the birthday of Theodor Seuss Geisel, who was born on March 2, 1904, and would have been 105 years old today.

Who doesn't love Dr. Seuss, right? So of course I want to chime in with my own birthday wishes. 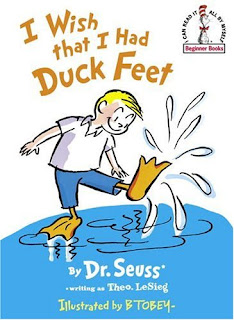 The first book I ever remember owning was I Wish that I Had Duck Feet, published in 1965, which started me off on a life of book collecting. It was written by Geisel under the pen name Theo LeSieg. (Geisel spelled backward.) Apparently, he used that name for books he wrote but didn't illustrate.

I don't remember the plot, but I found this summary: "A young boy weighs the pros and cons of possessing various animal appendages—such as a duck's feet, a deer's antlers, a whale's spout, an elephant's trunk, and a long, long tail — only to decide that he's better off just being himself."

The Random House site describes the story as "zany" and "insightful," two words that I think are just perfect for me. Okay, maybe I'm not that zany but I do try to be insightful.

After Geisel died in 1991 his widow, Audrey, licensed his books for the stage. As far as I can tell, there have been two musical adaptations of Dr. Seuss. (I'm still waiting for I Wish that I Had Duck Feet - The Musical.)

Seussical, with music by Stephen Flaherty and Lynn Ahrens, featured characters from a number of the Dr. Seuss books. It ran on on Broadway from Nov. 1, 2000 to May 20, 2001.

How the Grinch Stole Christmas, with music and lyrics by Mel Marvin and Timothy Mason, was produced by The Old Globe Theatre in San Diego in 1998. There have been two holiday runs on Broadway: in 2006-07 and a strike-shortened one in 2007-08.

According to a story in Time magazine, Seussical was the second most-performed high school musical in 2007. Little Shop of Horrors was first. (The rest of the list includes Thoroughly Modern Millie, Beauty and the Beast, Disney's High School Musical, Grease, Fiddler on the Roof, Bye Bye Birdie, Oklahoma, Anything Goes, and Guys and Dolls.)
Posted by Esther at 2:30 PM