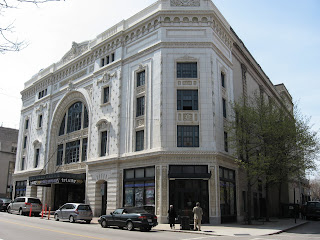 I love this time of year, when regional theatres announce their shows for the upcoming season. I can only imagine how difficult it must be in this economy to put together a mix of crowd-pleasers and new works that you hope will draw an audience.

Trinity Repertory Company unveiled it's 2009-2010 lineup this week. The theme for the season, according to artistic director Curt Columbus and associate director Craig Watson, is second chances.

Here's what they have to say:

“Starting over and taking up the challenge is something we’re all facing, regardless of ideology,” Watson says. “We wanted a season that people would have fun with – giving us all a second chance, a second wind, with music and laughter,” adds Columbus.

Trinity Rep doesn't usually tackle a lot of musicals, so I'm really looking forward to Kander and Ebb's classic Cabaret. And The Odd Couple, wow. I've seen so many of the movies made from Neil Simon's plays but I've never had a chance to see one on stage. In fact, I only know either of those shows from their film and television incarnations.

I saw Sarah Ruhl's The Clean House a couple years ago and really enjoyed it. She has a good ear for witty dialog and creates some great, quirky characters. I'm hoping Dead Man's Cell Phone will be another insightful look at modern life.

I have to admit that I've never heard of Shooting Star or its playwright, Steven Deitz. But I do love romantic comedies. Likewise, I'm not familiar with Pamela Gien, but the Syringa Tree sounds like a very moving personal story.

As for Twelfth Night, well, after seeing a few of Shakespeare's tragedies in a row, it'll be nice change of pace.

Cabaret book by Joe Masteroff, music by John Kander, lyrics by Fred Ebb
September 11 – October 11 in the Chace Theater
Berlin, 1931: music, money, and love are there for the taking. Cliff seeks inspiration for his novel. He finds it in Sally Bowles, the Kit Kat Klub’s chanteuse, who charms him into sharing his apartment. The emcee has not one but two ladies to keep him company. The landlady’s found new love with the grocer. Yet outside the cabaret the world is changing: what's in store for Sally and her friends? Cabaret celebrates the indomitable human spirit.

Shooting Star by Steven Dietz
October 16 – November 22 in the Dowling Theater
A young man and woman fell in love in college, and promised each other they’d change the world. Twenty years later, they meet unexpectedly in a snow-bound airport. Sharing stories deep into the night, they discover who they’ve become as they recall who they were. When morning comes, all flights are cleared for departure – what’s the final destination for these two? The author of God’s Country and Lonely Planet gives us that rare thing: a truly smart romantic comedy.

Twelfth Night by William Shakespeare
January 29 – March 7 in the Chace Theater
Shipwrecked, orphaned, separated from her twin brother, disguised as a boy in a hostile country – when Viola thinks things can’t get worse, she falls for her new boss, the Duke. He pines for Olivia, who’s sworn off men – till she met Viola’s male alter-ego. Spurned suitors, servants with delusions of grandeur, and Viola’s big, big love for the Duke – it’s a giddy mess that’ll put someone in the madhouse. Shakespeare’s meditation on love and identity is one of his most nuanced – and funniest – comedies.

Dead Man’s Cell Phone by Sarah Ruhl
February 19 – March 28 in the Dowling Theater
Why doesn’t he answer that phone?! Jean picks it up, and finds herself holding his legacy in her hand, along with the phone. Think about it: when we leave our bodies, do we live on in our cell phones, iPods, GPS’s, and PDA’s? Do these indispensable tools, these grown-up toys, hold the secrets to the afterlife? From the author of The Clean House, another whimsical comedy about life, death, and love in these modern times – and the connections, real and virtual, holding them together.

The Odd Couple by Neil Simon
April 9 – May 9 in the Chace Theater
Oscar’s wife has left him. Alone in his big apartment on Riverside Drive, his slovenly ways run happily amok. Then, Felix’s wife kicks him out. Concerned about his poker buddy, Oscar takes Felix in, but there’s a problem: Felix is a neat-freak, and his compulsive cleanliness drives Oscar to distraction. What will these woefully, wonderfully mismatched roommates learn from each other? Can they stay together, or is their living situation hopeless? Hilarity ensues in Neil Simon’s beloved touchstone of American comedy.

The Syringa Tree by Pamela Gien
April 30 – May 30 in the Dowling Theater
Growing up under Apartheid, six-year-old Lizzie confronts rules she cannot understand. Why must her nanny keep her daughter hidden? Among twenty-eight characters capturing four generations, she paints an evocative portrait of the abiding love between two families – one black, one white. History’s shocking events unravel, mingled with the resonant rites of passage all families share. As Lizzie comes of age, we experience her sacrifice and liberation, and the bonds which cannot be broken.

It seems *everyone* is producing Dead Mans Cell Phone this season. I missed it when it was at Steppenwolf last year. My friend saw it, said it was fantastic.

Thanks, Bob! Well Sarah Ruhl is a Brown alum so I think they have a special affinity for her work here. It is interesting to see how certain plays become the new "hot thing." I saw Rock 'n' Roll in New York in 2007, and next year, it's being done by a small regional theater in Rhode Island. Although I didn't really like it on Broadway.

RE: typo - yup - their website says that Twelfth Night is playing until March 7th