So, I was talking to a friend about the plot of the Mamma Mia! movie. I told him it involved a young woman's wedding and ABBA songs, and he asked "Isn't it just a musical version of Muriel's Wedding?" I replied, "What's Muriel's Wedding?" 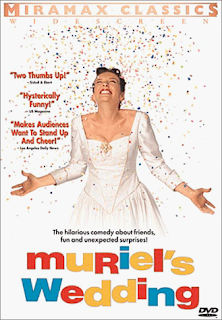 Okay, maybe back in the farthest recesses of my brain I had heard of the movie, but I'd never seen it, I didn't know who was in it or anything about the plot or where it took place or that it included ABBA songs. (Another movie with an ABBA soundtrack - Who knew?)

Well, I rushed Muriel's Wedding to the top of my Netflix queue, watched it last week and I really enjoyed it. It's definitely a dark comedy. There are laughs, but also some serious themes in this movie. So if you've never seen it, be prepared.

Toni Collette is the title character, a social misfit and ABBA fanatic who lives in the fictional Australian town of Porpoise Spit and dreams of getting married. Muriel doesn't have a lot going for her at the beginning of the movie. She's a high school dropout who's shunned by all the popular girls. She and her grown siblings lounge around the house all day while their mother waits on them and their boorish father. It's the kind of dysfunctional family that would be funny if it weren't so sad. Rachel Griffiths plays Rhonda, a spunky, take-charge friend who helps Muriel turn her life around and follow her dream.

Collette and Griffiths are both great. I can't believe how different they looked in 1994, when the movie came out. I know Collette from Little Miss Sunshine and Griffiths from Brothers and Sisters, one of my favorite tv shows, but I would never have recognized them if I didn't already know they were in Muriel's Wedding.

I've written before about how I love sweet little movies from England, and other parts of the British Commonwealth, that have quirky-but-lovable characters who are going through some kind of life-changing experience. Muriel's Wedding is a terrific addition to that list.
Posted by Esther at 12:15 AM

I LOVE Rachel Griffiths. She does one of the best and most convincing American accents I've ever heard. So much so that the first time I heard her speak in her native Australian voice, I thought she was faking it.

Just swooned over her impeccable acting on "Six Feet Under," one of my all-time favorite series.

It is pretty amazing hearing her American accent. I'm thinking it's time for a "Six Feet Under" marathon. I caught up with "The Sopranos," "Sex and the City" and "Arrested Development" that way. While I've seen one or two "Six Feet Under" episodes, I've never watched a whole season. So maybe that'll be my next tv marathon!

Her character is one of so many fascinating ones on that series. The writing is stellar, so is the direction (Kathy Bates did the honors on some; then she joined the cast in the third season). Aside from Griffiths, you have Michael C. Hall, Lauren Ambrose and the delectable Frances Conroy, an actress I wish would come back to the NY stage.

Just finished the fifth season, and you may never see a more brilliantly realized series finale. The last five minutes alone made me numb with catharsis. Definitely worth the marathon!!

I think I saw this about 4 times now. Love it. The first time though, it was in college with the football team... well that got a weird reaction from everyone... (though surprisingly, more guys liked it than not)

Hey Vance,
Yeah, Toni Collette and Rachel Griffiths are wonderful. And I never would have recognized them. I think what makes the movie so great is that the characters are so well-drawn. I mean, they're wacky, but also very human.