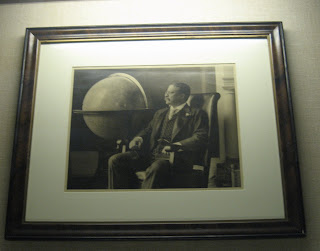 Of course with the inauguration, all the attention is focused on Washington this weekend but don't forget, New York is also a great place to take in some presidential sites.

There's Federal Hall, on Wall Street, where George Washington took the oath of office as the first president of the United States, and St. Paul's Chapel, where he worshiped on Inauguration Day in 1789. I visited both of those places on my Lower Manhattan tour.

Also during that same trip in November, I went to the Theodore Roosevelt Birthplace, a handsome brownstone on a leafy East 20th Street, near Union Square. (Thanks to Sarah for pointing me to all three!)

If you're visiting New York City, Union Square is a fun place to explore. The birthplace is open Tuesday-Saturday from 9 a.m. to 5 p.m. I suggest going on a Wednesday, Friday or Saturday, when the Union Square Greenmarket is held. There's a Whole Foods across the street. I've also eaten at Max Brenner's and browsed at the Strand Bookstore. 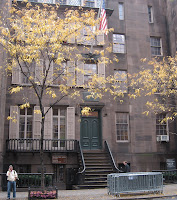 Okay, the birthplace is not actually the place where Roosevelt was born, on Oct. 27, 1858, and lived until the age of 14. That building was demolished in 1916. But a replica, with five period rooms, galleries and a souvenir shop, has been carefully reconstructed on the same site. If you're an American history buff, it's really a great place to spend a couple of hours. 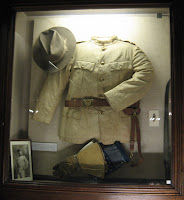 You can only see the upper floor on a guided tour and I missed that, unfortunately. But I did walk around the galleries and look through the display cases containing hundreds of items relating to the life of our 26th president - beginning with his birth into a wealthy New York family, through his years as an explorer, rancher, soldier and elected official. 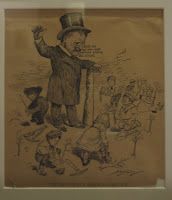 I knew a little bit about Roosevelt, that he'd been police commissioner in New York City and governor of New York, he was a conservationist and led the Rough Riders in the charge up San Juan Hill. But there were some things I didn't know - like his efforts as a "trust buster" to break up the big monopolies.

And really, as far as Roosevelts go, Franklin and Eleanor get much more attention from the history books, which is too bad. Maybe TR didn't get us through the Great Depression or win a world war but he was such such a fascinating larger-than-life figure. Under his presidency thousands of acres of land were preserved as national parks and monuments and wildlife refuges, advancements were made in consumer protection and food safety and construction began on the Panama Canal.

The National Park Service has done a a really nice job organizing the exhibits and seeing items relating to every aspect of Roosevelt's eventful life gives you a much better sense of his accomplishments.

Here are some of his presidential firsts:

How serendipitous is this? I'm currently reading David McCullough's "Mornings on Horseback" about the childhood of Teddy Roosevelt. It's an exceptional book that I highly recommend.

And one of these days, I'm planning on making return visits to each of the places you've mentioned.

Thanks for the recommendation! I'm glad you're enjoying the book. David McCullough is a great historian and a very nice, down-to-earth person. I met him quite by accident at Bill Clinton's first inaugural, the first and so far only inauguration that I've attended.

I was thinking after visiting the Teddy Roosevelt birthplace that I'd like to read a biography of him. And I'd like to go back and take the tour to see the upstairs rooms.

Have you read "The Rise of Theodore Roosevelt," by Edmund Morris? That's also supposed to be good. And you might enjoy "The Alienist," by Caleb Carr, a thriller in which Teddy Roosevelt is a character, as New York police commissioner.

Federal Hall was closed for Veteran's Day when I went to Wall Street, so I'll definitely have to make a return trip there, too, to go inside.

This is indeed a neat post, Esther. I took my niece Jennifer to the Roosevelt birthplace years ago when she was a little girl and I still have fond memories of that day. I'd really love to see the Sagamore Hill home that doubled as the vacation White House during TR's time in office. In the meantime, though, I can totally recommend both of Edmund Morris' books--"The Rise of Theodore Roosevelt" and "Theodore Rex" about his presidency. There's also a terrific one-man show called "The Bully Pulpit" that's definitely worth seeing if it pops up in your neighborhood, particularly if it stars Michael O. Smith, who is not only a dead ringer for TR but totally captures his exuberance.

Esther, I have read the Edmund Morris book that Jan recommends: "Theodore Rex" - I loved it. I've actually read many books about our 26th President and will likely continue to read more as I find him about the most fascinating of all our presidents ... to date.

Thanks for the comment, Jan. I think the TR birthplace would be great for kids. There's lots of interesting stuff to see and it's a pretty compact place. I'm glad you have such terrific memories of taking your niece. And I remember reading your review of "The Bully Pulpit." It does sound really interesting.

And thanks to you and Steve for the reading recommendations! I used to read a lot more history and biography that I do now so maybe it's time to get back into it.