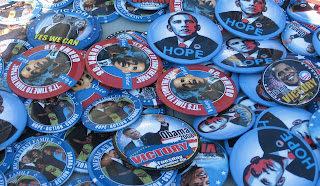 Historic is an overused term but not today.

This morning, I'll head over to the Providence Performing Arts Center to watch on a giant screen as 47-year-old Barack Hussein Obama take the oath of office to become the first African-American president of the United States.

I've been to one inauguration - Bill Clinton's first, in 1993. It's very exciting to be there and such an honor to see the leader of your country take the oath of office.

I was in the middle of a huge, festive crowd, probably the biggest I've ever been in. I remember it was a clear, cold day. My feet were freezing from standing in the same spot for hours. I still have the inaugural ticket that I got from my congressman but I don't remember that anyone ever checked it. I'm sure things will be much different today.

The Capitol looked beautiful and so timeless - gleaming white, decked out in red-white-and-blue bunting. Maya Angelou recited a poem. Marilyn Horne sang. I was hanging on every word of Clinton's address, trying to remember some line that would live in history. Sadly, it wasn't very memorable. I'm expecting better from Obama.

On NPR yesterday I heard an interview with Georgia Rep. John Lewis, a veteran of the civil-rights movement. Lewis talked about how when he was growing up in Alabama, black people could not register to vote. It is amazing how far we've come.

I'm thrilled that surviving members of the Tuskegee Airmen will be in Washington for the inauguration. I was at a dinner once where one of these courageous black World War II veterans spoke and his story was truly inspiring. Members of the Little Rock Nine, who endured jeers and threats to integrate Central High School in 1957, will be there, too.

"The arc of the moral universe is long," Martin Luther King once said, "but it bends toward justice."
Posted by Esther at 12:10 AM