Of all the shows closing on Broadway this month, including nine that play their final performances today, I think every theatre fan probably has one that they're saddest to see go. For me, it's Hairspray, which ends a 6 1/2-year run at the Neil Simon Theatre this afternoon. 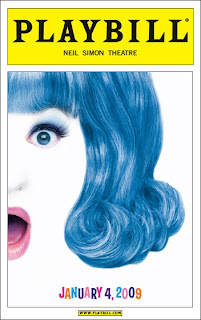 I first saw Hairspray on tour, in May 2007, and I loved the energetic choreography, catchy songs that capture an era and moving story about teenager Tracy Turnblad's effort to integrate a dance show in 1962 Baltimore. For me, Hairspray illuminates American history in way that's never preachy, always entertaining. It's about the possibility of change, a reminder of our struggle to become a more just society.

How much do I love this show? Well, I still have the confetti that dropped from the ceiling at the end of that performance and the Broadway cast recording has been in pretty steady rotation on my iPod ever since that afternoon.

Since then, I've had two terrific Hairspray-related experiences. The first came in May, when I met Scott Wittman who, with Marc Shaiman, his creative and life partner of 30 years, wrote the score. And in November, I had a chance to see the musical on Broadway, with the amazing, wonderful, hilarious Harvey Fierstein reprising his Tony-winning role as Edna Turnblad. As wonderful as it is to see something new, I loved sitting in the audience anticipating every scene, every song, every laugh.

I think my fellow blogger Patrick Lee, of Just Shows to Go You, who paid a visit to Hairspray last month, captures exactly how I felt: "I spent the first act with the wildly enthusiastic audience marveling at how feel-good a well-directed, delightfully choreographed and terrifically scored big Broadway musical can be when everyone is on their game."

While some movie-to-stage adaptations I've seen have felt a little flat, to me, this one hits the mark. I think it's a combination of music that captures the era, a compelling story and memorable characters. The more shows I see the more I realize that those three things aren't easy to accomplish.

After a tryout in Seattle, Hairspray begin previews on July 18, 2002 and opened on Broadway on Aug. 15. By the time it closes, it will have played 31 previews and 2,641 regular performances. Hairspray won eight Tony awards, including Best Musical and for its score, book, costume design and direction. In addition, Fierstein, Marissa Jaret Winokur and Dick Latessa won Tonys for their performances as Edna, Tracy and Wilber Turnblad.

The musical spawned a 2007 movie and now, there are plans for a sequel, with Shaiman, Wittman and Waters all involved. What I'm hoping for is that Hairspray has long and successful life in high schools and community theatres around the United States.

The specifics of Hairspray's story are fictitious. But I love the way it truly evokes the spirit of the early 1960s, a time of optimism and hope, when Americans confronted the stain of segregation and tried to make this country a more equal and just place for all its citizens. It's about standing up for what you believe in and the power of an individual to effect change.

When I think about the 1960s, the music is one of the things that comes to mind. At it's most basic, Hairspray is about the power of music to break barriers and bring people together. For nearly seven years, the show has brought audiences together on Broadway.

And while I enjoy the original movie and the movie musical, there's nothing like seeing this joyous show live, in a crowded theatre, with an audience laughing and cheering and being moved by the story. The beat stops on Broadway today, but it will go on.
Posted by Esther at 9:18 AM

I feel just as strongly about Hairspray, not only because of my Baltimore pride, but also because it was the very first show I ever saw on Broadway. The movie was okay, but you're right to say that nothing compares to the live show. I'm not sure if I'll want to see the sequel though. Sequels make me nervous.

Hey Katie,
Thanks for the comment! I have a friend from Baltimore and I've been there a few times. It's a great city.

What a great show to have for your first Broadway experience. Hairspray really is wonderful and seeing it live, the vibrancy of the music and the dancing really comes through so much stronger. But yeah, I wonder about the movie sequel. Still, I'd be interested in Marc Shaiman and Scott Wittman's songs, just because they did such a great job with the original.