You mess with Patti at your peril 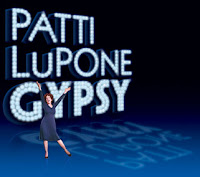 There's been quite a bit of talk on the Broadway message boards about an unscripted show-stopping moment at Gypsy last night involving Patti LuPone and an audience member who brazenly took her picture - at least three times! Steve and Sarah were there and provide firsthand accounts.

Let me run down some appalling examples of my own over the past couple of years involving illicit photography:

The people who got up out of their seats and walked down the aisle to the front of the stage, then stood there for a couple of minutes snapping pictures during Mamma Mia!

The women a few rows in front of me taking pictures of Chita Rivera with their cell-phone cameras during Chita Rivera: The Dancer's Life, in Providence. (This isn't only a problem in New York.)

The practically nonstop picture-taking going on all around me at a performance of The Radio City Christmas Spectacular.

And while this wasn't live, the guy at the movies when I was watching the final performance of Rent, who I swear recorded the entire second act, and probably the first act as well.

It's about time someone stood up to this behavior, which in addition to being rude and distracting can also be dangerous to the actors. Performers - and audience members - shouldn't have to put up with it. Forbidden doesn't mean forbidden unless you can get away with it!

This afternoon marks Gypsy's closing performance on Broadway. I saw it last spring and prior to that, as part of the Encores series at City Center, and I loved it. Tony-winners Patti LuPone, Boyd Gaines and Laura Benanti were wonderful, as was the rest of the cast.

So brava, Ms. LuPone, brava, for speaking out and for being an unforgettable Mamma Rose!

Update, Jan. 12. Apparently it was all a misunderstanding. Broadway & Me has the scoop.
Posted by Esther at 1:50 PM

Yeah, I hate when people taking pictures or recording the whole show during the performance.
It's really annoying, especially when they forget to turn off the flash!

Thanks for the comment, Broadway Producer! The picture-taking was especially prevalent at the Radio City Christmas Spectacular. So much so, that I thought maybe it was allowed. And when you take a picture, it is distracting to people sitting next to you. And the person recording the Rent movie was pretty amazing. He was in front and I could clearly see him recording the whole thing!