Be forewarned: There are spoilers in this review!

When we first see Meryl Streep as Sister Aloysius in Doubt, she's patrolling the aisles of St. Nicholas Church in the Bronx on a Sunday morning in 1964, making sure all of the children are paying attention to Father Flynn's sermon. Dressed in black, her skin pale and her face pinched, she quiets the talkative ones and gives the sleepy a whack on the back of the head. 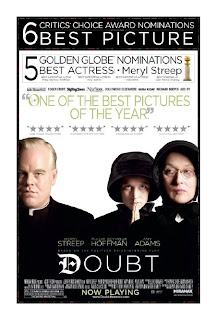 Streep is a fierce and fearsome presence throughout the entire movie, railing against ballpoint pens and poor penmanship and believes in Catholic tradition to the point where she opposes secular songs in the school's Christmas pageant.

At the same time, Philip Seymour Hoffman is a pink-faced, genial, gregarious and smiling Father Brendan Flynn, the parish priest who wants the church to be a more welcoming, friendlier place for its working class Italian and Irish flock.

The contrast between the two is stark. And it sets up a fascinating question over whom to believe when Sister Aloysius, the school principal, accuses Father Flynn of molesting a 12-year-old student. Is the priest guilty or is he a victim of a witch hunt by a nun who opposes his efforts at a more modern, approachable church?

I think part of the power of this movie version of John Patrick Shanley's Tony and Pulitzer-winning play is that you can have an endless discussion over it. There are good arguments on both sides. While other viewers may come to a different conclusion in the end, I really had no doubt. Although Doubt takes place in 1964, I couldn't help but see it through a 21st-century prism.

Incidents of sexual abuse against children by Roman Catholic priests have been well documented over the past decade. Some have gone to prison and dioceses all over the United States have paid out millions of dollars to hundreds of alleged victims of thousands of priests. From what we learn about Father Flynn over the course of the movie, he certainly seems to fit the pattern of abusive priests. I have no doubt that he was guilty.

What struck me as truly fascinating about Doubt was the cat-and-mouse game between Sister Aloysius and Father Flynn. She has to tread very carefully because as the priest, he has all the power in their relationship. She knows that he'll be protected by the higher-ups in the church. I suspect that when priests were abusing children, the nuns had their well-founded suspicions, especially nuns like Sister Aloysius, who seems to have eyes in the back of her head.

I never saw the play, but apparently on stage there are only four characters in Doubt: Father Flynn; Sister Aloysius; Sister James, a young nun; and the mother of Donald Miller, the school's first and only black student, whom Sister Aloysius suspects Father Flynn of abusing. The theatre audience never sees Donald, or any children.

In filming his play Shanley, who wrote the screenplay and directs, shows us the children, in school and in church. I don't want to give too much away but for me, there were a few things that I think stacked the deck against the priest. One of those was, simply, seeing the children. Joseph Foster II plays Donald as just about the quietest, most meek and well-behaved child in the school. As the only black student, he's also the most isolated and vulnerable.

In the end, Sister Aloysius is pretty much out there on a limb with her suspicions. Viola Davis gives a powerful, compelling performance as Donald's mother. She's fearful for her son's future and mostly seems happy to have the priest looking out for him. And Amy Adams plays the young Sister James as sweet and trusting, who definitely feels aligned with Father Flynn's more modern, tolerant views.

At the beginning of Doubt, Streep's Sister Aloysius isn't a very sympathetic character but by the end, I really did respect her. She's stern and tough but she cares about those kids. No matter what she thought of Father Flynn's theology, I don't think there's any way she'd defy him over it. After all, he's a priest and nuns are taught to defer to priests.

But if she thought for an instant that a priest was hurting one of the children in her care, you better believe she'd move heaven and earth to get him out of her school.
Posted by Esther at 10:05 PM

GV, Frankly, I'm surprised by your review, given how very fair you typically are to both sexes (Mr. Big notwithstanding).

You seem to condemn the priest in "Doubt" simply because of all the young Catholic boys who have been sexually molested by priests in real life instead of hard evidence presented in the story.

You also said that you didn't want to give too much away, but by the very nature of your verdict, I would submit that you've done just that.

It would be very interesting for John Patrick Shanley to someday come clean about what he himself had in mind for this fictional piece. I wonder (and I am by no means certain) whether he intended to write his play and then movie in such a way that men would view it with sympathy toward the priest and women with a sympathy toward the nun.

That's ultimately why I still confess that I'm left with doubt.

As written in the text of the play, and from what I gathered seeing the Broadway production, there is nothing but circumstantial evidence for either argument - Shanley's care and craft in the structure of his text is so airtight you really shouldn't be able to choose one over the other. You can have your gut instinct, much as Aloysius, but without concrete evidence, especially textual, we've got nothing.

However, that's the fun of seeing "Doubt" is the divergent reactions to the play at its conclusion. The actors and playwright often said that Act Two was the conversation the audience had on the way out of the theatre.

And with that said, I really need to get to this movie and soon! Cherry Jones' performance as Aloysius ranks as one of the all-time greatest that I've seen.

The gauntlet I believe Shanley has thrown down is his audience's 21st Century biases vs. the facts in this story as we know them.

Knowing what we know today certainly informs the way we view this story. But to Kevin's point, the evidence remains circumstantial and even Sister Aloysius seems to wonder what she's done.

Thanks for the comments, Steve and Kevin. I enjoy the debate. And like Kevin said, this is what the playwright intended, to provoke a debate. I certainly understand that people could come away from it with the opposite reaction or just not knowing either way.

It was hard for me to view the events in the movie and not think of the events of the past decade. But I also think there were certain things that happened in Doubt which raised my suspicions about the priest's guilt in this case.