A new star is born

I get home from work a few hours ago after a long day and I'm doing my usual check of my favorite theatre-related sites and what do I see - some totally unexpected Kevin Spacey news at Broadway World! 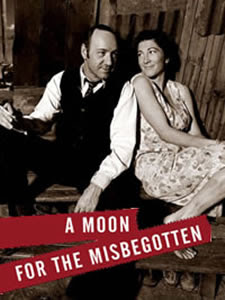 According to Michael Riedel's column in today's New York Post, Kevin will play Norman Maine, a washed-up matinee idol, in a workshop next month in London of A Star Is Born. Riedel says Hugh Jackman passed on the role. If all goes well, the musical could open in the fall at the Old Vic Theatre, where Kevin is artistic director.

In doing a little Internet research, I found that my fellow blogger Chris, at Everything I Know I Learned from Musicals, wrote about the project in May, when Jackman was still attached to it. (Thanks, Chris. I can always count on you!) And luckily, Hugh is still attached to the Houdini musical.

I'm not that familiar with A Star is Born. I don't think I've ever seen the 1954 version, with Judy Garland and James Mason. I'm pretty sure I saw the 1976 remake, with Barbra Streisand and Kris Kristofferson, a long time ago.

I guess this role wouldn't involve any singing, which is disappointing. I first became a fan of Kevin's after seeing him in the Bobby Darin biopic Beyond the Sea. And in my pre-iPod days, I pretty much wore out a tape I made of the soundtrack. (Yeah, I only have a tape player in my car.)

Still, I can see Kevin in this part. And the best thing about A Star is Born: the young singer his character launches to stardom is named Esther! Hmmm, maybe it's time to get my passport renewed.
Posted by Esther at 10:47 PM

I knew you'd love this news. Some of us are predictable, are we not? Wink. Wink. You need to see the 1954 film: Judy Garland and James Mason are transcendant. James is the perfect ass. Type casting for your Kevin? I think so. The original 1937 version worth it too: Fredric March and Janet Gaynor. I love Fredric March in anything. It was just on TCM this week. I'm not a fan of the Barbra Streisand remake.

And how can you not have a current passport?

Esther, You need to get a passport so you can go see this.

Personally, I've enjoyed all three film versions of "A Star Is Born" and own two of them. I agree with Sarah that the 1954 version is remarkable. Sadly, the full length was truncated at one point with much of the original footage falling into the dustbin of history - much of the audio still exists and has been attached to the DVD I own.

Thanks for the comments, Steve and Sarah! I guess I was indulging in a little wishful thinking. A trip to London probably isn't in the cards for me. I'll have to keep my fingers crossed for a Broadway transfer. But on both of your recommendations, I will definitely put the 1954 movie in my Netflix queue!