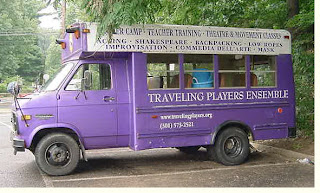 I needed a photo to accompany my previous post on the decline of reading drama. This wasn't exactly what I had in mind but something about it made me smile. I mean, all of those programs in one small vehicle. Pretty impressive, huh!

At first I thought maybe the Traveling Players were an itinerant troupe of actors who traveled the country in their little purple bus bringing drama to the people. I was intrigued by the combination of Shakespeare and backpacking.

It turns out that the Traveling Players Ensemble, founded in 2003 and based in Great Falls, Va., "strives to link theatrical work to nature by rehearsing and performing outdoors and by producing plays in which nature is a dominant theme."

Apparently my first instinct wasn't too far off. The Players do a lot of work with teenagers and their summer camp "reflects the origins of theatre, when troupes of actors roamed the ancient and medieval countryside, relying on the barest props and boldest imagination to convey their art."
Posted by Esther at 10:00 PM