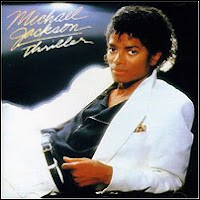 Okay, I groaned when I read that the Nederlander Organization had bought the rights to develop a musical based on Michael Jackon's Thriller album and 14-minute video.

James Nederlander, the president of the Nederlander Organization, said “I love the idea of making Thriller a musical. Girl meets boy, they fall in love, boy has big secret, now what…”

I liked Jackson when he was a little kid singing and dancing with his brothers. He was so cute! And I liked Thriller when the album came out in 1982, although I haven't listened to it in years. (It is the world's best-selling album of all time.)

Apparently, Mr. Jackson is expected to participate in the musical's creation. Given his rather bizarre public image over the past decade or so, I wonder if that's a good idea? I mean, just mentioning his name makes me cringe.

And seriously, a musical based on the music video? Maybe I'm just not that into werewolves and zombies.
Posted by Esther at 7:09 PM

I think it's exciting! I grew up on Michael Jackson's music and Thriller was really big when I was in high school.

Yeah, I like the music, too, but I have to admit my first reaction was the same as Amanda's. It's just so hard to think of Michael Jackson these days and not laugh or shudder. Still, I agree, Thriller is a great album.

I do love his music and Thriller was my first album ever, but yeah. I think I cringed too. And now that I read "Girl meets boy, they fall in love, boy has big secret, now what…”... all I thought was... boy has big secret... boy falls in love with littler boys? Ew... Sorry. But it made me laugh and choke at the same time.

Yeah - I think a new low has been reached with this one. Sadly, though, its target audience: middle America, European tourists and nostalgic middle-agers will probably flock to see this.

I have to say, though, the notion of putting more money in Michael Jackson's pocket makes me a little ill.

I'll get my nostalgia from ROCK OF AGES, thanks very much.

I can buy it as a trumped up forty minute theme park extravaganza, but certainly not something that I think feasibly could be padded out to a full evening at top prices.