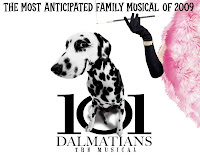 The kid in me got pretty excited when I read this - a musical version of 101 Dalmations is going out on tour starting in the fall. Yeah, I know, the grin on that dog's face is a Photoshop special. But still, it's awfully cute.

Released in 1961, 101 Dalmations is one of my favorite animated Disney movies. Why do I love it so? It's set in London, it has romance, a terrific villain and an adorable, floppy-eared supporting cast. Plus, it's got the barking chain!

According to the story at Playbill.com, 101 Dalmations will feature a score by Dennis DeYoung, a founding member of Styx, and a story by director and lyricist B.T. McNicholl. Apparently, they're going back to the original 1957 novel by British writer Dodie Smith for inspiration.

The producers are Magic Arts & Entertainment, Troika Entertainment and Luis Alvarez, who produced a stage version of 101 Dalmations in Spain in 2001. Check this site for more information on the creative team and pictures from the Spanish production, which was quite successful for Alvarez.

And while there's no tour schedule yet, Broadway/San Diego has booked the musical for June 1-6 2010. You can read a brief synopsis of the show on their Web site.

A big question in any stage version of 101 Dalmations is, of course, how do you portray the dogs? I wrote a blog post about this last year, where I suggested the actors could wear abstract wire dalmation heads, like the horses' heads in Equus. But they're going a different route.

The director, Tony-winner Jerry Zaks, says the actors playing humans will be "in a heightened form of dress and scale so as to appear larger than life — as they would seem from a dog's point of view."

And the dalmations will have "no ears, no paws — but, rather, a clever use of costumes in the black-and-white palette that will immediately set them apart from the human characters."

Yeah, I know people running around in dog costumes has the potential to look a bit silly, but I'm still intrigued by this project. It's great to have more theatre choices that all ages can enjoy. This could be kind of fun - hopefully for adults as well as kids.
Posted by Esther at 12:20 AM

Great! I think it's going to be terrific, although I'm not so sure about the Styx connection. Oh dear, Styx? I can't help but think of "Baby" from my jr. high dances. Oh, dear. Anyway, it's exciting. Anything Disney is magical IMHO. Plus, you may think that's a photoshop of the smile on the dog's face, but I've known plenty a furry friend to crack a grin. In fact, my own two kitties are smiling at me right now.

Awww, your kitties are very sweet! I guess this is going to be based more on the original novel than on the Disney movie. But it's a great story, it's got cute dogs and I'm intrigued!