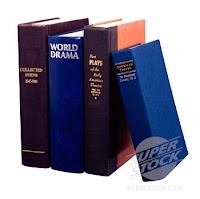 For the first time in 25 years, Americans are reading more literature, which is great. According to a report from the National Endowment for the Arts, 50.2 percent of U.S. adults said they read at least one novel, short story, play or poem in 2008.

I remember reading quite a few plays in high school. As an adult, I rarely picked one up until recently, when I started going to the theatre more. Now, I routinely read plays I've seen on stage. But I've always had pretty varied reading habits.

I think part of the problem is that drama is segregated in the parts of libraries and bookstores where few readers venture. And plays are simply no longer a part of popular culture. If we don't hear about them, we're not going to read them.

Maybe if Oprah picked August: Osage County for her book club that would help give drama a boost. Or, A Raisin in the Sun, since this is the 50th anniversary of the Broadway premiere of Lorraine Hansberry's play. How about it, Ms. Winfrey?
Posted by Esther at 8:05 PM

I dislike reading plays, but I love the theater. I don't think there's much to be gleamed from this statistic; after all, nobody reads teleplays, and yet, television soldiers on. (To use a more successful example, when's the last time you read the script of a MOVIE that you liked?) Reading a play is more academic--the play's the thing, and it was meant to be seen; that's why it's not a short story comprised of dialogue.

Oh my god, how awesome would that be if Oprah picked August: Osage County for her book club? It would give a stratospheric boost to theater.

Thanks for the comment, Aaron. And you bring up a good point about tv. I'll admit I've never read a movie script but I've noticed that they do publish them now. I've seen them at Borders and Barnes & Noble in the film section. So maybe someone's buying and reading them!

I definitely agree that plays are meant to be seen on stage. But I do like reading them, sometimes to give another chance to something that didn't work for me on stage and sometimes because I loved it so much I just want to read the dialog again.

I imagine the percentage of Americans who read plays for pleasure was never very big to begin with. I guess I'm part of a small minority that's growing even smaller!

Hey Jeff,
That's exactly what I was thinking!

I've mentioned this before but on my last trip to New York, when I'd strike up conversations in the theatre with my fellow tourists, none of them had heard of "August: Osage County." When the movie gets made, then they'll hear about it!

One thing I really love about "A:OC" is the way Tracy Letts explores all of the pressures women face. And that would certainly fit in with some of the fiction that Oprah's selected. But I also think "A Raisin in the Sun" would be very timely and as a bonus, it's available on dvd.