Rick Warren and dining with friends 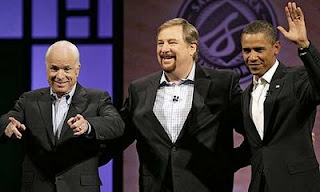 As excited as I am about Barack Obama's inauguration, I have to say something about Rick Warren. When the pastor of California's Saddleback Church was picked to deliver the invocation, I followed the controversy that ensued and one thing he said bewildered me.

In an interview last month on the Web site Beliefnet, Warren said that he's against the redefinition of marriage to include gay and lesbian couples.

Beliefnet's Steven Waldman asked him whether he thought those things were equivalent to gays getting married and Warren replied, "Oh, I do."

Then he added: "Most people know I have many gay friends. I've eaten dinner in gay homes. No church has probably done more for people with AIDS than Saddleback Church. Kay and I have given millions of dollars out of Purpose Driven Life helping people who got AIDS through gay relationships. So they can't accuse me of homophobia."

Okay, this is what I don't understand:

How can you say that you have gay friends, you've eaten in their homes and yet, you compare gay and lesbian relationships to pedophilia, incest and polygamy? How can you go to someone's house, share a meal, consider them a friend and understand so little about who they are? Was there no conversation during dinner?

I guess Warren's comment bewilders me because it's the complete opposite of my experience dining with friends. Personally, I find that when I get to know people, I have greater empathy for them.

How could Warren have dinner with his gay friends and not understand that sexual orientation is something you're born with, that there's no gay lifestyle, that there are, as a friend of mine once said, "many shades of gay" and that gay people who are in loving, committed relationships with a spouse or partner are every bit as ordinary and yes, normal, as any heterosexual couple?

I'm fortunate to have friends with so many different stories, from so many different backgrounds. Eating together was one of the ways we got to know each other. We talked endlessly about our lives, about all the things you're not supposed to discuss - politics, religion, race. I miss those dinners so much.

Perhaps Warren can compartmentalize but I can't. I can't imagine listening to my friends discuss their dreams and struggles and experiences, hearing them talk about the person they love, laugh at their jokes and then refer to them in hateful, vile terms, viewing them as some kind of "other." I think about how much we have in common, how my friends deserve the same respect and rights that I enjoy.

I understand that Obama is trying to reach out to evangelicals and find common ground. And I certainly don't think he's antigay. But I have to agree with what Richard Cohen wrote in The Washington Post about Warren's selection:

In the end, it's more important what Barack Obama does than what Rick Warren says. Warren is entitled to his personal religious beliefs but as far as our country and its laws are concerned, I don't want my friends dehumanized, their rights abridged.

As president, I want Obama to reverse "Don't ask, don't tell," so that anyone who wants to serve their country can do so openly and proudly; I want him to work toward repealing the hurtful and discriminatory Defense of Marriage Act; and I want him to support passage of the Matthew Shepard Act, to strengthen hate-crimes laws.

We have come so far in this country. People talk about "the 5,000 year definition of marriage" as if it's immutable, as if it's never changed in any way - ever. But thankfully, the way we think about things changes all the time. And tomorrow is a perfect example.

Barack Obama will take the oath of office with his hand on the Bible that Abraham Lincoln used when he was sworn in by Chief Justice Roger Taney, who, in 1857, wrote that black people could not be citizens of any state "and so far inferior that they had no rights which the white man was bound to respect."
Posted by Esther at 10:09 PM

I hope Obama will do as much for the gay community as he says. I know he's publically stated he's against redefining marriage, too, which is saddening, but then again, I also know he would never have gotten elected had he said anything else. A nasty catch-22. I hope the next 8 years brings good things to come for the gay community.

The whole Warren thing is just upsetting on every level and I can't say anything else without swearing.

Hey Amanda, I definitely agree with you. As a lifelong Democrat I have to admit that the party does sometimes take its most loyal constituencies for granted. I hope it doesn't happen in this case.

I know what you mean, Dale. I probably went on much too long about this but I had a lot of things I wanted to say and it's my blog! It just enrages me that Warren can trot out that old saying "some of my best friends are" and refer to his "friends" in such vile, hurtful language.