Wicked flies out of Chicago 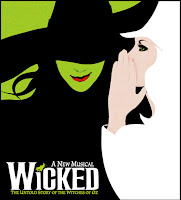 After 1,500 performances in 3 1/2 years, the city of Chicago bid farewell to its sitdown production of Wicked today.

Chris Jones, of the Chicago Tribune's Theatre Loop blog, says there were some people who thought the city couldn't support a big show for an extended period of time. They questioned the wisdom of spending $10 million to create a Chicago company. But Wicked turned out to be immensely profitable.

Here's part of how they did it:

"[Producer David] Stone and his partners marketed Wicked on freeway billboards in Wisconsin and Indiana, and in airports in Michigan. Unlike most producers, they kept the touring production out of cities that might have impinged on Chicago. They were rewarded with a flood of out-of-state visitors. On Amtrak, a green Wicked bag became almost as common a sight as an American Girl doll."

Well, I guess that's one downside of a sitdown production that I hadn't thought about.

It's great for Chicago and for everyone who could hop on the freeway or a plane or an Amtrak train. But what about the theatergoers in Wisconsin, Michigan and Indiana who couldn't make it to the Windy City to see the musical? Maybe now, the tour will come to a closer location and they'll have a chance.

And in the Chicago Sun-Times, Rondi Reed looks back at the experience of portraying Madame Morrible.

Reed left the Chicago production for the role of Mattie Fae Aiken in Steppenwolf's August: Osage County, picked up a Tony award when the play transferred to Broadway, returned to Wicked, then left again to go with the A:OC cast to London, where last week they finished up a sold-out run at the National Theatre. Whew, she's had an exciting couple of years!


Here's part of what she had to say:

"To be a part of that theatrical juggernaut is something that comes along once in a blue moon. I had never done such a long run before, either -- never been asked to be so consistent, so disciplined, have the kind of stamina and heart it takes to play on that level.

"You are responsible not just to yourself, but to the other 125 people who show up for each performance behind the scenes -- in the orchestra pit, the wardrobe room, the sound board, the management office, the ones pulling the ropes, making it all happen and making it seem like magic in the process."

"And oddly enough, doing Wicked in the 2,200-seat Oriental prepared me for August, so that a Broadway theater didn't overwhelm me. It taught me about the size of performance needed to reach the back rows and still maintain integrity."

Interestingly, in August, Jones wrote "don't be surprised if she [Reed] appears as Mme. Morrible on Broadway next year." And Reed's Wikipedia entry says that she's scheduled to reprise her role as Madame Morrible in the Broadway production in early spring. I haven't seen Wicked on Broadway ... yet.

I truly regret that I havn't seen Wicked yet. Frankly, now I wonder about the quality of the traveling shows that we would get in Houston.

The only time I've ever seen Wicked was on tour. I'd never heard of anyone in the cast. And I loved it. Same for Hairspray - I saw it on tour before seeing it on Broadway, a couple of months before it closed. And it's one of my favorites. So I would definitely give Wicked a try if it comes to Houston.

My sister helped load the show out of Chicago. She's headed for Louisville and Appleton next. Here's the link to the rest of the tour for 2009. Houston's not on the list, but San Antonio and Austin are. (Forgive me if that's nowhere near Houston. I am geographically challenged...)

Thanks for the link! It must be interesting to load a show in and out, especially one as elaborate as "Wicked."

I'm not sure my sister would use the word "interesting" "Exhausting" maybe...